I have a story for you!! In case you're busy, here is the story told using gifs.


Once upon a time, there was a girl named Jenna. 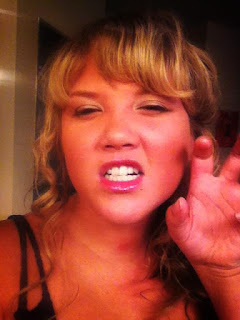 She wrote a book.

She got a bunch of requests and even a few R&Rs, but nothing panned out. This made Jenna sad.

She wrote another book.

She got a full request!

The agent e-mailed and said she wanted to talk.


As some of you may know, I wrote a book called Washed Up. I loved the concept, agents loved the concept, and it got a butt ton of requests. It made it into every contest I entered. Washed Up even gathered a few R&Rs, which I blogged about. The whole process was good for the ego until the replies started trickling in. Many were form responses, "I just didn't connect with the story." etc.

A few months after I sent in my R&Rs, I received passes on them both. Both agents had preferred the older versions. I was super bummed, but I still had a good handful of fulls out.

To keep myself sane, I wrote Beautiful Malevolence.

I stayed up late, skipped meals (and a few showers), and within twelve days it was done.

A fellow writer, Christie Stratos, put out a twitter-call for test clients for her beta service, Proof Positive.

I signed up and sent her the first draft. She sent be back an edited draft along with some super awesome, constructive critique notes. I made the changes she suggested, and sent it along to my two CP's, Rachel and Amber. (i lllllllllluuuuuuuuuuuurrrrrrrrrrvvvvvvvvvvveeeeeeeee you)

They had it back to me in days with super similar notes ( lots of ADD ALL THE FEELS and STOP WITH ALL THE DIALOGUE TAGS).

I spent ten days revising after that, and then I sent out a few queries from PitMad requests.

A few more rejections for Washed Up came in, but so did a full request for BM (hahahahahah worst initials ever).

Over the next week or two I sent out a few more queries to the agents still reading Washed up, letting them know I was in the beginning stages of querying a new novel. This got me a few more full requests piggy-backing on Washed Up rejections. (Note: Querying a new ms with material still out is confusing.)

I knew my query/pages were working, so I entered two huge contests. I was almost positive I'd get into them given my previous contest luck.

I didn't make it into either.

The next day, Beautiful Malevolence got it's first rejection, but it came with super great notes. I changed a few things, and then sent out a flock of queries.

In that batch, I queried an agent, let's call her Agent K, who had already passed on both Washed Up and Second Hand Lace at the query level. I knew it was a long shot, but her recent sales/client list made it impossible NOT to query her. She was at the top of my list.

On Thursday, June 6th, I held my breath and e-mailed Agent K with my query/ten pages. That was at 11:30am.

I sent it right away.

I queried  a few more agents that weekend and got to work on twitter-stalking Agent K (oh come on, you know you do it too.)

On Saturday, I get a notification that Agent K is following me on twitter. I convince myself that it's purely a coincidence. Who wouldn't want to follow me? I'm hilarious.

So, I just finished BEAUTIFUL MALEVOLENCE. I love it! Can we talk tomorrow?

Also, can you tell me about other genres you like to write or any other projects you're currently working on?

I'm so excited to speak with you!

I jumped up on the couch and half laughed/half cried. Matt thought I was losing my mind.

His exact words were, "All she wants to do is talk to you. Why are you freaking out?"

I explain, we jump-hug, and then I attempt to sleep. (Thank you, ONE, for keeping me company all night :D )

Agent K calls the next morning.

She offers to represent me, this book, and anything else I write in the future! She gives me some great notes on BM, including a potential title change!

I fumble through a list of questions and she answers them all in a way my excited-foggy brain can comprehend.

We agree to chat next Monday (today!!), and she sends me over the agency agreement and a few of her client's e-mails.

I wrote them right away and the feedback I received was incredible. They didn't just talk about how great Agent K was, but how awesome of a partner she is during revisions/submissions, and how hard she fights for each and every one of them. These e-mails made me even more excited at the idea of working with her.

I spent the next day informing agents that had my query/full/full of WU.  Every agent passed on Washed Up. Outstanding queries for BM resulted in another 10 full requests. One agent offered a R&R if I didn't end up accepting the offer. Another agent liked it a lot, but her senior agents didn't. In the end, I only had one offer of representation, but that was the only one I needed.

Here are some stats for you number lovers :)

And now, without any further ramblings, I'm thrilled to announce that I am officially represented by the brilliant, amazing.........

Phewf. My fingers are a little sore after all that.

I just wanted to further the finger pain and thank Christie Stratos for all her hard work and her wicked-awesome proofreading/beta service.

Rachel, I love you and your blunt, ass-kicking notes. You saw what needed to be changed, and I never would have gotten an agent without you !! xoxoxoxoxo

Anyways, I'm super excited to start revising BM and for all the fabulous things the future holds!!