So, as you may know, my first book came out! Yes! It did! Right now, it's just digital, but that's cool! Everyone has an E-Reader, right? I've been making a ton of cute jewelry to give away with the paperback copies in the next month or two, but in the mean time I wanted to do something to tide myself over.

I had NO clue what to giveaway until I started obsessively checking my usual websites. Querytracker and Publishers Marketplace.


So, in honor of my book-baby seeing the light of day, I'm giving away a digital copy of Second Hand Lace AND your choice of a Premium QueryTracker membership (Querying writers - you NEED this) or one month of Publishers Marketplace so you can stalk sales to your hearts content.

All you need to do is comment on this blog post and you're in the draw! I'll leave it open until next Wednesday (May 1st).

How Second Hand Lace came to be

On October 27th, 2009 I went to a halloween shopping. My husband, Matt, and I wanted to be a dead couple.

Matt walked into value village, found a blue, wool suit, and tried it on. It fit him like a glove. It took around five minutes.

That same day we went to four other thrift shops and I tried on every different wedding dress they had . Now let me tell you something - wedding dresses are a bitch to fit once they've been altered. I tried on some that were four sizes too big that I couldn't get over my albeit curvy butt. I tried on some two sizes to small that I would have had to take in six inches. It was a freaking nightmare.

So at the end of the night we stopped at the last shop on our list. I tried on eight dresses, and when I finally got to the last one I was ready to have a full-out-carb-fueled-melt down. The last dress on the rack was from the 1920's. It looked teeny tiny, but I tried it on anyway. When it fit, I did some sort of variation of this:

Anyhoo, I bought the dress and our costumes were awesome. 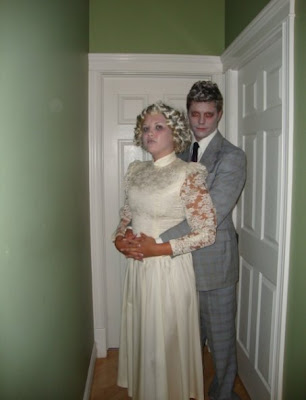 That night we had supper at my parents place, so I brought the dress along to show them. It gave my dad the serious willies. He wouldn't touch it, look at it, nothing. He said the person wearing the dress was dead, and he didn't want it near him (you should see him in an antique store - it's like the haunted mansion).

The next day we got a wicked snow storm, so my dad picked me up for work (I work for him). On our snowy two and a half hour commute we started chatting about how creepy my dress was. By the end of the drive the owner of the dress had been gruesomely murdered and disassembled. Just as we pulled up to the office, my dad said "You should write a book about that."

The whole thing took me two years. Actually, just over two years. I won't bore you with all the querying details, or how I queried the first draft. That can wait for another day.

Long story short, I signed my contract with Turquoise Morning Press in March of 2012.

And now the day is finally here where I can buy my own book off Amazon.

It's kind of surreal.

I don't think it'll feel real until I can squeeze the paperback.

Anyways - that's the story of how Second Hand Lace came to be. Now here are a few links if you wanna check it out!

OR you can add it to Goodreads too :)

AND here's the cover if you missed it! 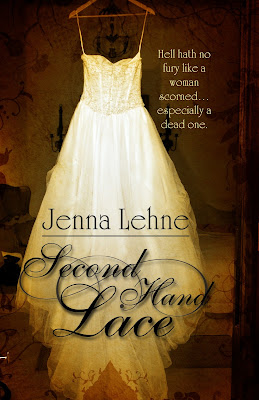